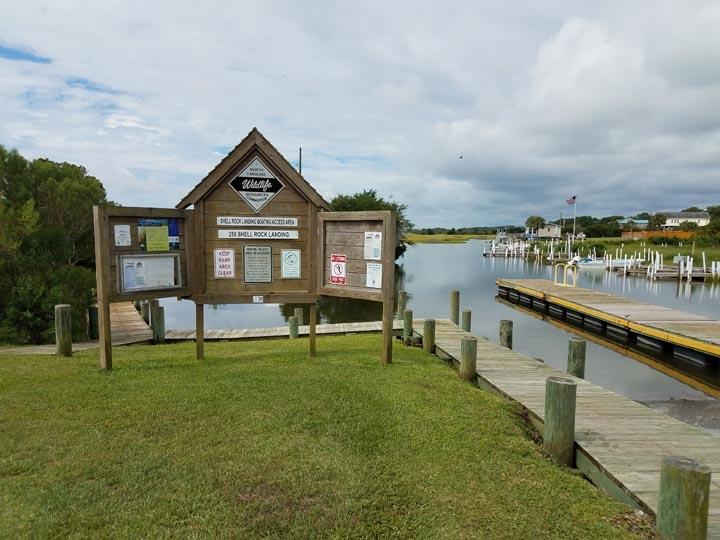 HUBERT | An Onslow County boating access that is heavily used but has little parking will soon be getting an upgrade.

A redevelopment project is planned to expand parking at the N.C. Wildlife Resources Commission’s boating access at Shell Rock Landing in Hubert.

“This is great news that expanded parking at Shell Rock Landing will become available to help more people access the waterway,” state Rep. Phil Shepard, R-Onslow, said in an announcement this week about the planned improvements. “The work is scheduled to begin after peak boating season sometime in early fall.”

The engineering firm McGill and Associates, which has multiple offices across North Carolina, has received erosion control approval, a stormwater express review permit and permission to move forward with the project from the state construction office.

The planned improvements will include the use of a permeable paver product called EcoRaster that will allow for an increase in on-site parking. The proposed design also relocates the access road to maximize allowable parking along entrance, according to WRC information.

Limited parking has been an on-going problem at the boating access and last summer state officials placed ‘no parking’ signs along a portion of the site to keep boaters from parking their trucks and trailers on grassy areas designated for the control of stormwater run-off.

Brian Janowsky of Hubert, who has lived in the area 25 years, said boating and kayaking are a huge part of life along the coast. But to get to the water there needs public access with adequate parking.

He’s glad to hear about the parking improvements to come at Shell Rock Landing.

“Adequate parking is a must for anyone to legally access the waterway without illegally parking or trespassing,” Janowsky said. “There’s been plenty of times in the summer on my way back in from fishing, wondering if I’ll find a ticket on my window or even getting towed for parking in the wrong spot at Shell Rock. Better parking is much needed as well as a better road to the ramp with the amount of visitors who go through there.”

The boating access is located at the end of Shell Road Landing Road off Bear Creek Road and has a dirt road access to a small gravel-covered parking area.

The WRC information on the project indicates that all of the existing gravel will be removed and the existing site redeveloped with the EcoRaster reinforced grid.

The current 10 spaces will be increased to 62.

“Stormwater permitting based on the impervious surface area and site-specific restrictions restricted the grass area that had historically been used for parking from being used. The high usage of the site prompted the new and innovative use of the EcoRaster to solve both problems,” said WRC spokesman Ryan Kennemur.

Due to the expansion, two additional ADA-compliant parking spaces will be provided, one trailer space and one single-vehicle space.

The project will involve the parking area only as the boat ramp is in good condition.

The cost is estimated to be $500,000 and is being paid through a combination of state funds and grants.

WRC plans to begin construction Oct. 2 and the boating access should be back open by the end of December.

Reporter Jannette Pippin can be reached at jannette.pippin@jdnews.com or 910-382-2557.